A huge thank you to County Judge Paul Metzger for his dedication to YouthZone for so many years and the youth of our communities. 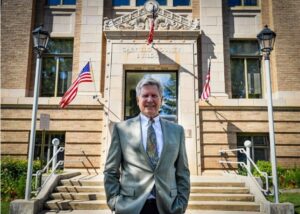 From presiding over mock trials with local high school students to many a real trial in the Garfield County Courthouse, County Judge Paul Metzger has heard and seen a lot in 20 years on the bench.

“I just feel really fortunate to have had this position,” Metzger said as he prepares for retirement at the end of September. “It’s been challenging and stressful, but really, really rewarding.”

Along the way, he said he appreciated those occasions when he felt like he had a real influence on the life of someone who came before him in court, whether it was an adult facing a misdemeanor or traffic charge or a young person who’d gotten in trouble and landed in juvenile court.

“It gives me a real sense of achievement when a person comes into court and feels that they have been heard and treated fairly and who I was maybe able to help move in the right direction,” Metzger said.

After growing up in Denver and earning his law degree from the University of Denver, Metzger got his start as a prosecutor with the 4th District Attorney’s Office in Colorado Springs.

He and his wife, Cindy, relocated to Glenwood Springs in 1990 when he joined the law firm of Scott McInnis, who at the time was a state representative and later served six terms in Congress. He’s now a Mesa County commissioner.

“After he became a congressman, I had my own private practice, doing family law, general civil litigation and a little bit of criminal defense,” Metzger said.

His first foray into the judiciary side of things came when he was appointed as New Castle municipal court judge in 1999, before being appointed county judge in 2003, replacing longtime former County Judge Victor Zerbi.

“I had practiced in County Court in front of Judge Zerbi quite frequently, and also had the opportunity to work with him on mock trial,” Metzger said of the high school team competition where students play parts in the courtroom in a mock civil or criminal case. Metzger would also soon play a big role as a coach and participant.

“When Vic decided to retire from the county judge position, it seemed like something ideal for me to consider,” Metzger said.

County judges handle misdemeanor criminal cases, as opposed to the felony cases that go before the district judges; as well as traffic cases, small claims and civil cases up to $25,000 per claim.

At the time Metzger was appointed, the county judgeship was not full time, so then-Chief Judge Thomas Ossola asked Metzger if he would be willing to take on Garfield County juvenile court cases in the 9th Judicial District to round things out.

It ended up being among the most rewarding of his experiences on the bench in the first-floor courtroom at the Garfield County Courthouse on Eighth Street in Glenwood Springs.

“Especially in juvenile court, the focus is to try to help the juvenile and their family with the services that are available to help make sure that there won’t be future incidents, or to limit those as much as possible,” Metzger said. “We also try to keep kids in the home when at all possible, as opposed to being in detention or being committed or placed outside the home.”

The Glenwood Springs-based youth support services and criminal justice diversion program, YouthZone, has been a huge help in that, Metzger said.

“They play a big part in helping us right from the beginning in that effort to try to avoid being placed in detention, or to get out of detention and put onto a good transition plan as quickly as possible,” he said. “They’ve just been a huge help to families and juveniles in Garfield County.”

The result is less stress on the courts system to intervene and find those alternatives, he said.

County court also tends to involve more individuals who don’t have attorneys and who are representing themselves, which involves an extra level of guidance by the judge.

“I try to look at people in an optimistic way,” Metzger said. Sometimes they’ve just made a mistake or used bad judgment, and oftentimes there’s substance abuse or mental health issues that enter into the reason they’re in the courtroom, he observed.

“I really like to focus on trying to help make a positive change for those folks,” he said.

“I’ve always found him to be very thoughtful in his approach, where he really listens to the litigants in making decisions on what are sometimes very difficult issues,” Willman said.

Willman does a lot of landlord-tenant dispute work, including evictions, which can be especially challenging.

“It’s really hard for people and a difficult place to be in, but I’ve always felt he gave the tenants a full hearing and listened carefully to them before rendering a judgment,” Willman said.

Metzger’s own children, Drew and Elise, now grown and moved out of state, participated in mock trial while at Glenwood Springs High School.

It has become one of the judge’s passions.

Metzger, along with Zerbi and Willman, has been a mainstay in the program, serving as an attorney coach and team coach, and acting as judge at the regional competitions, several of which have been held in Glenwood Springs.

Willman said Metzger brings some calm to the courtroom when the nervous energy among the student participants can tend to be high.

“He has always devoted his time and energy to answer students’ questions, and has a real calming influence on the students when they get very stressed in competitions,” Willman said.

Metzger, 65, hasn’t taken a lot of time yet to think about what he’ll do in retirement.

He said he’s mostly been reflecting on all the changes that have come about over the past 20 years in the way the courts operate, and the relationships he’s built along the way.

“It used to be that I’d have a stack of paper files next to me on the bench, and no computer monitor screens or laptop,” he said. “Now, I think I have two screens, and we have another screen up in the courtroom that’s utilized for our remote hearing participants.”

Much of that came about during the pandemic, when the courts began using the video conference platform WebEx more broadly to conduct hearings remotely.

“I think there have been a lot of positives associated with that,” Metzger said. “But I still prefer that face-to-face contact in the courtroom.

“It’s been a privilege to work with a great team to try to come up with good solutions to the problems and challenges that are presented in the courtroom every day,” he said.

With wife Cindy retiring at the same time from her longtime career as a pediatric occupational therapist, he said there will likely be more travel and leisure involved.

“I have given some consideration to applying for the senior judge program, which allows you to work part time and fill in where necessary across the state,” he said. “But I’m not quite ready to commit to anything just yet.”